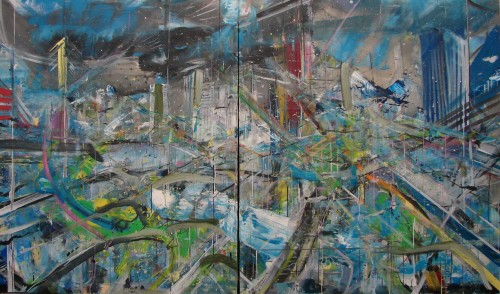 Malerei is a series of nine solo exhibitions, with the duration of one weekend each, showing paintings from Dutch artists.
The eighth Malerei account the paintings of artist Anneke Wilbrink (1973 Zwolle).

Architectural Cocktail
Hergé on Brussels: “The Capital of Europe still has the world and its citizens neighborhoods and streets to offer with more than a human face. It is a wonderful mix of styles and movements, a strange but refreshing architectural cocktail where the sublime and mediocrity go hand in hand.”

I read this quote a few weeks ago. It reflects very well my current view on my painting practise. I can even read my slightly changed attitude in it.
I’ve always been fascinated by the diversity of the urban landscape: impressive new high-rise architecture alongside older and lower architecture. Sceneries interspersed with blockades and barriers. I always considder the optimistic man as the cause of all these structures, who does his best to make something beautiful or something good out of it. Architects who have seen their buildings being realized perhaps have the same desire as I often have as a painter: to create something that is imperishable. This is difficult or even impossible to realize. It’s the motives of the creative man which I particularly see in the urban environment and which I often find recognizable.
In my opinion a painting is successful when the complexity has not led to chaos, but instead shows some sort of control of opposites. Lately I think the word control is more suitable for my painted images than the word harmony. Like I won the last battle in a painting! But this is not the case. I see that in some of my older works. There was a pretty optimistic sort of harmony present. In my recent paintings I try more than ever to do justice to reality. The reality from which Hergé said regarding to the city of Brussels that the sublime and mediocrity go hand in hand. That is wonderful! The city which offers mankind neighborhoods and streets with more than a human countenance. A painting with simple means offers the viewer a more than human countenance.