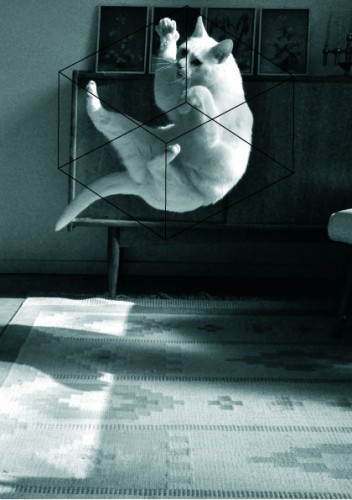 Last week, I turned over onto my back, opened my eyes to stare at the sky and I let the waves and current thoughts carry me.  My soft and solid body became meshed and one with the liquid state of the water.  I was perfectly aligned with the surface and awareness of the placement of the sun and moon and stars was lost by the wayside.  Hunger left, and where its void was, euphoric tears came.
Previous to this state of flow, I was positioned at dead center inside a cube:  Each face obviously equal despite significant visual and sensory differences.  Nevertheless, with all things being equal, fulfilling the task to select just one surface proved to be disabling.  I thought, ‘Why did I not set about to rather plot graphs, pull weeds or decide over anything already fixed and absolute?’  At least then proceeding to the next step would be obvious.

Apathy originates in philosophy from the connection with providence, the idea that things naturally go towards the good, so there’s no need for great struggle. In which way is this idea present today in life and in contemporary art practices? Is it necessary sometimes to take your hands off the work and let it live by itself? And in which way can small and trivial everyday apathies enter, unknowingly or not, the creative process?

For its next show, Sils projects has brought together four artists to explore the various facets and antithesis of Apathy; the stoic, natural law, acceptance and arbitrary objectiveness are just the beginning paths that we intend to let go of.

In contemplating the idea of care, (indeed an aspect of apathy since the two, by definition, seem to be opposites) several works by Gerwin Luijendijk (NL) came to mind.  Inherent in those works we witnessed a balance whereby the artist takes on a role of nurturing; be it nourishing our eyes, feeding desire, or training himself.  The film ‘Clip Here, Tie There’, was selected to highlight methodic gestures that embody an emotional attachment; gestures which through their repetition provide for a flow of gaze and arousing thought.  And yet, those very gestures permit detaching escape into the cerebral.

The practice of walking in art is often related to the spiritual or the ritual. We found attractive the idea of aimlessly walking in Looking for My Bike, Keys and Phone after a Heavy Night of Drinking, by Derek Brunen (CA) The action of having no knowledge of direction brings us distant memories of a gesture which seems pointless because we don’t have a clue of its conclusion. Any information we might be looking for is no different than the keys we’re looking for to guide us through life. Echoing titling of artworks from the 60s and the 70s, Derek Brunen gives in his title enough elements to make the spectator want to join his quest, also at the risk of retracing and repeating the same steps, potentially to no end.

Traditional scultpure often evokes the idea of significant and monumental. Francesca Nobilucci (IT/UK) turns this concept upside down with her work UGGly Boot. A fragile piece which confronts the spectator with an object so present amongst recent trendy visual input the item almost becomes invisible. The quality of its realisation looks at first sight as the result of a school workshop, and its small details seem to get lost in the crafty appearance of the whole object. If only Andy Warhol would have known the plans of future shoe designers, maybe this whole colonizing of shoes could have been avoided… However, like a child’s unconditional love for the mundane, care transcends through this piece, attracting the eye, despite its worn-out or unnecessary state of being.

The work of Sergio Breviario, (IT), brings the spectator to an atmosfera metafisica which has its roots in the Italian artistic tradition. This element is then introduced silently into the domestic atmosphere of a kitchen in the video I was born in the 70s and I’m proud of it, and in the white, aseptic space of an office, in The time machine. In these two videos a sheet of paper is marked through a series of minimal yet precise gestures, which are able to transform a movement into surface, and the surface into a space which we are not allowed to enter, but in which everything seems to be accomplished.

A publication for ‘Don’t come if you care’ featuring contributions from the artists will be released in autumn 2011.

‘Don’t come if you care’ is made possible thanks to the proceeds from the Sils Silent Benefit Auction, spring 2011.