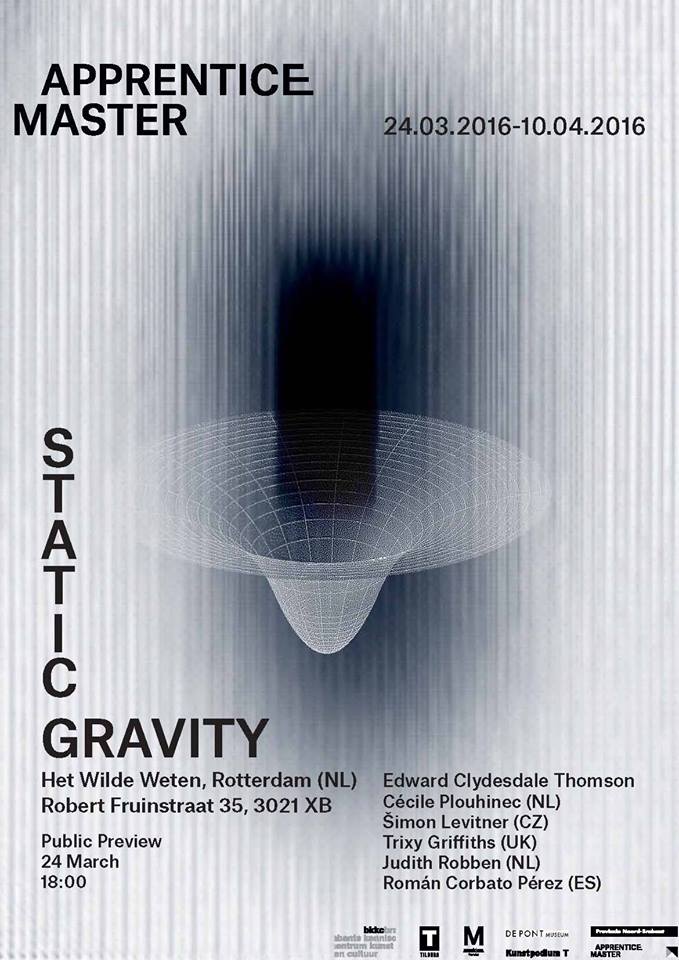 Static Gravity inhabits a frozen moment between the outstretched arm and the inertia preceding a response. Between breathing in and breathing out. Between the drop and its echo. Between the equatorial triangle and the elastic band.

Román Corbato, Spain 1980
Is an architect and Master in Contemporary Art. He is currently doing PhD studies at the Faculty of Fine Arts of Pontevedra investigating relationships between landscape and place. His artistic research approaches these twotopics from a contemporary viewpoint working with the idea of “site/nonsite” and the act of walking as aesthetic and symbolic action.

Trixy Griffiths, United Kingdom 1991
My practise involves experimentation with everyday materials, scale and repetitive units. Making use of geometry and pattern to construct sculptural pieces, which are then presented in assembled installations which aim to re-contextualise the banal from their modest practicality.

Cécile Plouhinec, 1990 France
Always there is the feeling we have to compete with the empty space, which is often the best. It doesn’t reject or seek for something peculiar, it is just receptive to what is happening. When it get clouded by furnitures, artworks, people, it lost a vibrance which stroke me: something eloquent and ineffable at once. Also the mind shall be inspired by its character, and shall not seek for ideas and neither reject what is slowly rising from its wilderness.

Judith Robben 1988, The Netherlands
I’m a parttime student at the art-academy in Tilburg, to be an art teacher. My work can be described as intuitive but determined, and subtle but powerful.

Edward Clydesdale Thomson, 1982 United Kingdom / Denmark
What kind of ‘image’ of nature is it that surrounds us in our contemporary urban environment? What does the pattern on you’re bed spread tell you about utopian ideals? What does the landscaping of your local recreation area tell you about a Constitution? How can we approach the intersection of an
understanding and appreciation of the representational history of landscape, and a desire to keep making and looking?