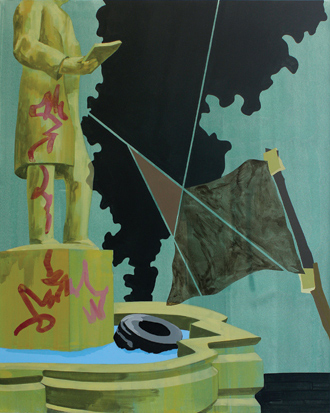 Joep Overtoom’s work explores the soul of landscapes that are in extremis, sliding towards and away from a hallucinatory and opaque kind of break down, depicting a controlled chaos and by the same coin – a controlled type of suspense.

The paintings that often deal with the environments of a solitary figure depict a world in decay. The works are being informed by Overtoom’s boy-ish notions of constructing and altering ones environment. This altering makes the work a reflection of the human psyche rather than a landscape in the traditional sense and gives away suggestions as to the political motivations and agenda of the fictional alter ego’s that dwell in the world of his paintings.

Overtoom’s hallmark is of a calm, almost clinical depiction of mundane every day objects, with an unemotional clarity, however, the hallucinatory intensity and psychological affects of these images actually arise from the viewers own sense of revulsion, horror or intrigue. It is within this domain that the true strength of Joep Overtoom’s work really comes into the fore – the viewer. The work forces the viewer to reflect and question his potential unease, to analyse the ‘reality’ as depicted on the canvas, and ultimately to find his own place within this world. Joep Overtoom’s work may be viewed as simply existential melancholy, however could it also not be viewed as a call against the banality of modern life, a life which denies the possibility of mystery, myth and magic.